The History of Hops in the Yakima Valley

Growing Your Beer Since 1872

The hop is a perennial climbing plant of the hemp family (Cannabinaceae). The wild hop (Humulus mas) is very different from its cultivated cousin (Humulus lupulus) which not only gives beer its aroma and bitter flavor but also preserves it. The high-quality brewers hop is the result of a process of cultivations spanning several centuries. As hops are used almost exclusively in brewing, this development is closely linked with the history and geographical distribution of beer.

Botany of the Hop

The hop is a dioecious plant; this means that a single plant bears only male or only female flowers. Only the female plant forms cones. The hop is propagated by means of cuttings. The part of the plant above ground is cut off at harvest time; only the rootstock remains, from which new shoots grow the following spring.

The rootstock stores the reserves which will enable the plant to grow to a height of 30 inches in the spring with virtually no other nourishment. In spring, the rootstock puts out shoots. These are covered with hooked hairs to give the bines a better grip as they climb. In the Yakima Valley, bines can grow by up to 14 inches in a single day, but the average is about 4 inches.

The leaves of the hop plant grow from the nodes of the bine. The underside of the leaves are smooth, the top surface is very hairy.

When the hops have climbed halfway up their trellises, the laterals start to grown. The total length of a plants laterals can reach up to 360 feet. As the hop cones grow almost exclusively on the laterals, their development is very important for the yield.

After a flowering period of 3 to 4 weeks the cones form, mature and are ready for harvest. The cone itself contains the substances which make the hop so valuable to the brewer.

Experts can recognize the different varieties of hop, not only by the shape and aroma but also the colors of the different parts of the plant.

Hop Cultivation in the Yakima Valley

One of the first, Charles Carpenter, is said to have begun hop farming in the Yakima Valley in 1872. Carpenters father, a settler in Constable, New York, supplied the cuttings. In 1876, Yakima sent 80 bales of hops west. At the beginning of 1890, hop farming spread in a southeasterly direction. Yakima County had become the most important hop producer in Washington State.

As in all US Hop regions, the period between 1920 and 1940, marked by Prohibition and Depression and a consequent overproduction, threatened the very existence of the planters in Washington State. Even so, the farmers of the Yakima Valley were able to produce hops at a lower cost than anywhere else in the world. Thanks to their open-mindedness they had converted to seedless hops at an early stage and had improved the quality of hop picking. By doing this they established the basis for the good reputation of Yakima Hops. These hops were exported throughout the world, particularly in the years 1939-1950.

The Yakima region has one further notable advantage: it is the only region in the world in which a farmer can plant cuttings in the spring and expect a full harvest in autumn. Because of this the farmers in the region can react more quickly to changes in the marketplace.

The Yakima Valley contains approximately 75% of the total United States hop acreage, with an average farm size of 450 acres (182 hectares) accounting for more than 77% of the total United States hop crop. Many hop farms in Washington are third or fourth generation family operations. Most growers also grow fruit, but some grow mint, grapes and even row crops. Typically, a Washington hop grower will raise a combination of both aroma and alpha variety hops. The majority of the hops produced in Washington however are alpha and super alpha varieties. Important Washington aroma varieties include Willamette, Cascade, and Mt. Hood. Alpha varieties include Columbus/Tomahawk, Zeus, Nugget, and Galena, which when combined account for more than half of the total Washington hop acreage.

In the State of Washington hops are only grown commercially in the Yakima Valley. However, within this Valley there are three distinct growing areas: the Moxee Valley, the Yakama Indian Reservation and the Lower Yakima Valley. Each of these areas, while no more than 50 miles (80 kilometers) apart, possess unique growing conditions. The Lower Yakima Valley, with its slightly warmer climate, can produce outstanding yields during first year (baby) hop plantings. Many other crops grow in the lower Yakima Valley enabling growers to easily diversify. The Yakama Indian Reservation, located in the center of the Yakima Valley, is most noted for its vast open spaces and its ability to produce superior alpha levels.

Sources:
Photos Courtesy of the Yakima Valley Museum
The Hop Atlas: The History & Geography of the Cultivated Plant, published by John Barth & Son in Nuremberg, Germany in 1994
usahops.org 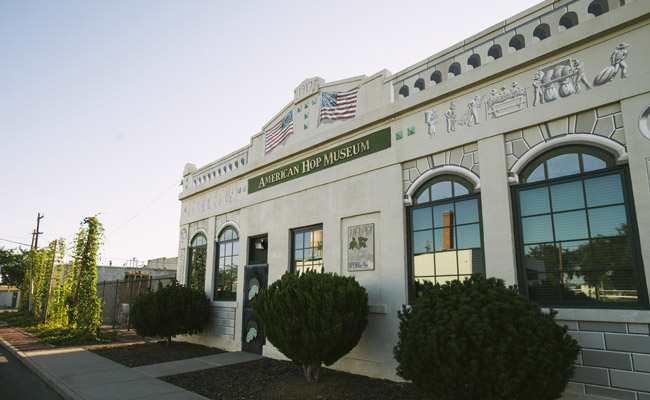 Make a point to walk through the American Hop Museum while in the Yakima Valley. With the majority of the worlds hops grown in this region, few people outside of the area have had the opportunity to learn about the industrys history with live hop plants, historical equipment, a video on the past and future of hop cultivation and a gift shop.